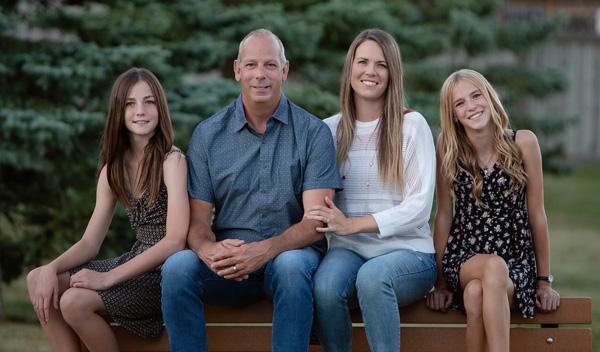 For nearly forty years I have lived in Grande Prairie and watched it grow in population and change in appearance. I would be proud to represent your voice to ensure we build a safe, vibrant community moving forward with great accountability for the taxes you spend.

My intended role on City Council will be Community Driven while being Financially Responsible. Our children and the generations after them should have the opportunity to appreciate the amenities of their city without being financially burdened with endless tax increases. As a long time local business owner, I believe it is possible to have an abundant community while maintaining a realistic budget.

Let’s Work Together to bring balance to Grande Prairie’s budget by treating it as though it is our very own. My businesses have always been founded on the values and inspirations of our employees, while ensuring stability within the business itself. I will treat this position no differently and with no less respect. I will ensure that City Council hears the importance of treating their residents as customers instead of just “tax payers”. As a dedication to my engagement I would like the opportunity to respond to any inquiries through email as a way of ensuring that your opinion is given the time and consideration that it deserves.

As your councillor, I will work to ensure the people of Grande Prairie have a voice to shape THEIR community. A safe, vibrant place to live, raise a family and retire.

I believe with better financial responsibility we could continue to grow and evolve our community amenities while avoiding tax increases. This would create more value for the taxes you pay.

My goal is to work together with council and constituents to bring balance to Grande Prairie’s municipal budget. As a business owner I am comfortable diving into budgets and financial records and not quitting until the plan makes financial sense.

While serving on City Council from 2017 to 2021, I made it a priority to familiarize myself with the city budget. I considered both sides of the budget: Items that were a benefit to the community as well as those that were financially burdensome. Because of this experience, I will be immediately effective at the four-year budget deliberation scheduled in November of this year, which is only a few short weeks after the conclusion of the 2022 by-election.

For every budget deliberation that I participate in, I bring well-researched recommendations that I believe will positively impact the community while being economically sustainable. My push for reduced spending on the previous council term was effective in decreasing taxes and therefore will continue to be a priority for me if elected on October 17.

I have been a proud part of the Grande Prairie community since it had a population of 15,000 people. Throughout my life I have been fortunate to have grown up in a family that taught me to work hard, be confident and accept knowledge from others where I may lack. With that lesson in mind, I have surrounded myself with people whom I could learn and grow from. I am grateful to have many mentors and peers, as well as my wife Dalene, and our two daughters, Priya and Saige, of whom are all very passionate about this community and how it is represented. They help to remind me of the variety of perspectives that people in this community may have and that each one deserves due consideration.

I am an entrepreneur by nature having owned small local businesses, from retail, restaurant, selling Real Estate, building homes and small land development projects for over 20 years in Grande Prairie. I mindfully conduct my businesses in a way that reflects the high morals my mentors have instilled in me, and because of their examples I am very passionate about giving time back to the community. I am very proud of the community involvement list below and look forward to having the chance to deliver a consideration of both a business and community perspective at the City Council table.

My experience with board dynamics and working as a team will enable me to apply such skills to the City Council table in a productive manner.

Who Can Vote and What to Bring

Thank you for making sure that your vote counts!

When and where can I participate in the Advance Voting?

Who Can Vote and What to Bring

Thank you for making sure that your vote counts!

What is the main objective you would like to achieve if you are elected?

I was diligent and effective on my focus of zero tax increases in my first term and will continue will a focus of appropriate spending if elected for a second term. My favorite part of Council in my first term was budget deliberations and would be honored to be a part of it again.

What experience does Wade have when it comes to being a City Councillor?

The hardest thing about experience is that you have to have it. And I do.

When I was a City Councillor last term, I took specific interest in the budget. I learned how budgeting for municipalities works, and I researched what made the most fiscal sense for Grande Prairie and its citizens.

Shortly after the by-election, in November, City Council will be deliberating a new four-year budget. Between capital and operations expenditures, the use of nearly one billion dollars will be planned. Because I’ve had this budgeting experience on our City Council in the past, I will be immediately ready to effectively contribute and make sensible decisions on your behalf.

I won’t beat around the bush here—municipal budgeting is difficult and I hold great respect for the process. During my last term, I found myself taking a personal approach to how we spend our ratepayers’ dollars and engaged with many people on a lot of topics. I discovered what you had to say on issues that ranged from Eastlink Centre operations to urban chickens, and the big one: the purchase of the Stonebridge Hotel (PS I voted no on that project, and I was the only one to vote no).

Listening to what you had to say about how our city was run became especially important to me. I regularly found myself reflecting what was shared with me over various conversations. Some of those conversations were challenging, I’ll admit. But I met them head-on because my mission is to put forward what I believe will end up being what’s best for Grande Prairie. I feel these conversations must be had, and I won’t shy away from tough conversations when they are needed.

Of course my experience as a Grande Prairie City Councillor extends beyond budgeting and challenging conversations. I know the process of City Council and I understand the responsibilities that come along with being a City Councillor. I’ve been on many committees and even chaired a few. I take the job seriously, and after this small break since the last term ended, I’m ready to get back into City Hall and get to work for you.